Lakeside has a rich history dating back to the mid 1800’s. The town site was organized in 1886 at the peak of the land boom. Mostly ranches, there were a few grand homes, a community church and also a beautiful inn and boathouse built by the lake. This became a well-known vacation spot for the wealthy of Southern California. Busy times, with trains arriving three times a day in Lakeside, this area was once the main stagecoach stop on the way to San Diego and east to the Butterfield Stage line and to Yuma.

The area depended on the “horse economy” with the breeding, feeding and caring for the horses used to carry the supplies to the gold mines and mountain communities. Most of the population was transient, but those that stayed were trying to build a community.

As time went on in this small, rural, dusty end-of-the line horse and buggy township of Lakeside in 1910, why would a few women want to add to their day and try to better their community? Because Josephine Mansfield, new to Lakeside, and who had formerly been an active community member in Massachusetts, had the forethought to know that these women needed friendship, a chance for learning and culture and there was a definite need for community involvement.

Josephine Mansfield came from Boston to Lakeside in 1904 with her daughter Mary A. Ross and family, with whom she made her home. While living in Massachusetts, she was an active member of the Woman’s Relief Corps, Daughters of Liberty and the Grange.

Eight women formed the Woman’s Club of Lakeside in 1910. Josephine was one of the eight charter members and her daughter, Mary Ross, was elected the first president. At their next meeting each member brought a guest who would also join the club.

Their mission was mutual helpfulness and sociability, the cultivation of interest in intellectual and civic pursuit for Lakeside. The red geranium was to be the club flower; red and green were chosen for the club colors, dues would be 25 cents a year and membership was by invitation.

Over the past 90 some years, the club has successfully continued these goals with the distinction of the first and oldest community service organization in Lakeside. The club’s history is full and interesting.

Just a few of the many events in the history of the Woman’s Cub of Lakeside:
•Assisted with the building of the Lakeside Town Hall in 1911.
•Established a branch of the county library in 1913 and
•Purchased in 1920 their own clubhouse building located on the northeast corner of Maine and Lakeshore. This building, during World War I and II, became the Red Cross headquarters, a reading room for the service men, a teaching facility for first aid and chemical warfare classes by civilian instructors, and a fully equipped civilian defense station for the Lakeside district.

When we realize that the original dues were 25 cents per year later raised to 50 cents, the amount of money given to community projects from 1910 to 1920 and the years following was made through hard work and community spirit—qualities still very evident in the club today. 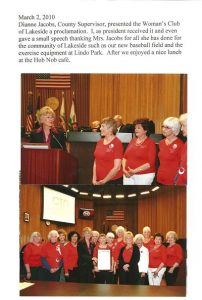 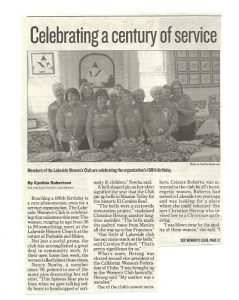 Woman's Club of Lakeside celebrating a century of service 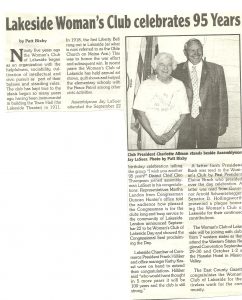 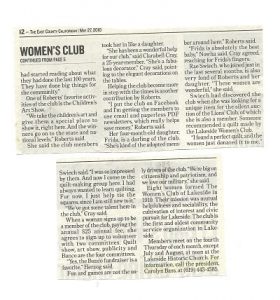